Rise of the Golden Aura 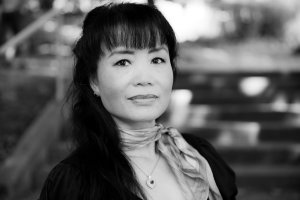 Today I want to introduce you to Chanrithy Him, author of Rise of the Golden Aura, a story that reimagines vampires. Chanrithy told me about Asian vampire mythology and how that contrasts with Western vampires. Her novel was inspired partly by the first Queen of Cambodia and the legend surrounding her being a Naga (Dragon) princess. Below is an excerpt about the legend.

Chanrithy Him is an international speaker and author of the widely acclaimed, award-winning memoir, When Broken Glass Floats. Her book has been praised in reviews by such publications as the New York Times and the (London) Sunday Times. Radio Sweden Channel One compared her memoir with books written by Imre Kertész, the 2002 Nobel Prize winner in literature.

She is currently running a Kickstarter campaign to publish Rise of the Golden Aura. I hope you’ll check it out and support this indie author!

Legend of the First Queen of Cambodia:

Traditional stories passed down from generation to generation tell how the land of Cambodia was formed. Once, there was an ocean ruled by Naga who built an empire under the sea. The land was ruled by the Indian Empire. One day, Neang Neak, a daughter of the Naga king, took a bath by the seashore. Her beauty caught the eyes of Preah Thong, a young Indian prince who was visiting the area. Falling in love with the princess at first sight, the prince went to ask the Naga king for Neang Neak’s hand in marriage. The king refused to give his permission unless Preah Thong defeated the Naga’s most powerful warrior. The prince won the contest, and the marriage took place. Keeping his word and as a token of his love for his daughter, the Naga King swallowed the water to uncover the land that is now known as Cambodia and gave it to the newlywed couple as a wedding gift.

While growing up in Cambodia, I was captivated by the romance and mystery of the ancient Khmer temples, the Asian vampire mythology, Khmer stories of reincarnation and incantation.

In the memory of our recent tragic history, I journeyed back in time to pen my award-winning memoir, When Broken Glass Floats: Growing Up Under the Khmer Rouge (Norton). Since its release in 2000, my book has been used in high schools, universities, and book clubs around the world, and I’ve been invited to speak about my experiences to audiences in America and overseas. My life story is featured in a documentary film called The Will To Live, along with Archbishop Desmond Tutu and Dr. Juan Almendares of Honduras.

Historically, Cambodia had her share of legendary leaders, namely kings who built famous temples. As a Khmer-American, like my fellow Cambodians in the Khmer diaspora, I romanticize the Golden Age of Cambodia, when she was a powerful and prosperous empire that flourished and dominated almost all of inland Southeast Asia.

In 2005 I toured some of the famous ancient Cambodian temples that I have dreamt about since I was eight years old. Of all of them, there was one that truly captivated my heart and soul. It was a famous 12th Century Bayon temple with 54 majestic four-face towers. There, I felt a strong presence of a distinguished female spirit watching me.

By cosmic or spiritual energy, we made a special connection. At that moment, I pledged that I would write a novel that would feature this enigmatic temple. In 2012, I began writing Rise of the Golden Aura, my first novel of a series that reimagines the vampire culture. In doing so, I hope to inspire, entertain, educate, and empower even more readers worldwide.

Rise of the Golden Aura features a Cambodian-American teenager as its heroic main character. It is set in Cambodia and America. It is a young adult vampire-romance fantasy with a cross-cultural theme. The concept of Asian vampire myth and folklore is a fresh new take on the previous portrayals of vampire culture. It will resonate with people around the world, especially young girls and women. It will appeal to fans of Stephenie Meyer’s Twilight series and fans of P.C. Cast and Kristin Cast’s House of Night series, just to name a few. 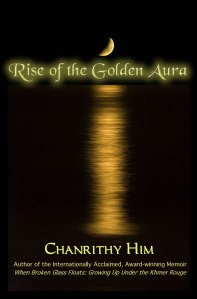 In Cambodia, there are signs, for those who can read them. A Radio Free Asia interview documents a blind man’s vision—that ancient royalty will reincarnate as a queen with supernatural gifts, and an aura that can be seen only by those who belong to the spirit world.

Halfway around the world, in Portland, Oregon, high school student JD Bophatip, dutiful daughter of a successful immigrant mother, takes a leap into her American life when she is inspired to compete for the title of Queen of Rosaria in the Portland Rose Festival. Then her life takes an even more unexpected turn, and not just because of the charming, enigmatic Ryker Erickson.

With his tall, handsome physique, melodic voice, and mystical air, Ryker is irresistible. But Ryker, too, is powerfully struck—by the mystery of JD’s glowing, golden aura.

As JD and Ryker grow closer to each other, and closer to understanding each other’s secrets, JD’s dreams become increasingly prophetic. Struggling to understand a mysterious gift containing Sanskrit inscriptions and sacred jewels, JD seeks to harness her emerging powers in time to fulfill her destiny and save her life.

Praise for Rise of the Golden Aura, from an editor and a publicist:

“There is a lyrical beauty in your writing, a longing, that is spell-binding. We are hooked! Thank you so much for sharing.”

“The vampire-romance-fantasy topic is in tune with what sells in today’s market. The vampire queen plot has potential to be immensely fascinating. This is a facet of vampire culture that has not yet been utilized within this culture.”

It is nighttime. Darkness has drawn its veil over a large lake that slides serenely through towering pine and fir trees. A glowing image reflects abstractly in the still black water— a fairy, flying. The reflection fades as wings ascend into the dark sky, then she changes course and gradually descends, closer to the water’s surface.

She looks a young girl, a hauntingly beautiful creature but with crimson eyes. She does a double take over her own reflection, as if seeing it for the first time.

She wears an exotic outfit, gold, with an ornate crown and a necklace of glowing colored stones. On her arm is an armlet, on her ankles, decorative anklets. She stares cautiously at her luminescent hand as it touches her red, pounding heart. Blue lungs contract and expand. She can see her blood busily circulating life beneath her skin.

She trembles. Slowly, she embraces herself, with both her luminescent arms, and then she stretches them out like wings and flies away, between mountains dense with tall trees, timber-flanked valleys, and cold, clear streams covered by the veil of darkness. Her long black hair flows to the rhythm of the wind.

Strands of my hair brush against my face. I feel my heart beat in my chest and my arms stretched outward as if I’m flying.

A dream. Just a dream.

Thanks for sharing about your book, Chanrithy!

This entry was posted on December 12, 2015 by Melissa Eskue Ousley. It was filed under Monster and was tagged with Asian vampire, Cambodia, Chanrithy Him, kickstarter, mythology, Rise of the Golden Aura, vampire.