Monsters of the PNW: Colossal Claude

The mouth of the Columbia River is a dangerous place. The bar is so deadly, it’s been dubbed the Graveyard of the Pacific. Hundreds of ships have wrecked at the Columbia Bar, thanks to the fire hose force of the river mixing with tumultuous ocean waves. Add in gale force winds and constantly shifting sand bars, and you can see why this part of the world is so wild.

It’s wild in other ways too. Orcas frequent the mouth of the river, feasting on salmon. Great White sharks cruise the coastline, hunting seals. Humpback whales have been spotted 14 miles inland, near the Astoria-Megler bridge. This towering green bridge spans the four-mile-wide river, connecting Oregon to Washington. The Columbia River is also rumored to be home to a sea monster. 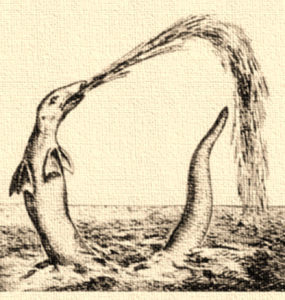 Colossal Claude has been described as being about 40 feet long, including an eight-foot-long neck. Its body is said to be round, ending in a tail. The beast’s head has been alternately described as looking like a maned camel, or having an “evil, snaky look.” Some people believe the creature resembles a plesiosaur, comparing it to the Loch Ness Monster.

One of the first reported sightings of the monster was in 1934, by the crew of the Columbia River Lightship, a floating lighthouse. As the story goes, the crew observed the animal for some time using binoculars. They wanted to take a lifeboat out to get a better look at the creature, but officers denied the request out of worry the beast would capsize the small boat.

Three years later, another crew reported seeing the creature. Skipper Charles E. Graham on the commercial fishing trawler Viv provided a hauntingly similar description to what the crew of the lightship had reported. Around the same time, about 150 miles down the Oregon coast, near a rocky area known as the Devil’s Churn (south of Yachats), a couple reported seeing a similar animal.

In 1939, the crew of the Argo, another fishing vessel, got a close encounter near the mouth of the Columbia when the creature reared up over ten feet above the water. It watched them calmly as it took a twenty-pound halibut of the ship’s lines and ate it. According to the ship’s captain, Chris Andersen, the creature’s “head was like a camel’s. His fur was coarse and gray. He had glassy eyes and a bent snout.”

The description of Claude having fur makes me wonder if the creature could be some kind of long-necked seal (assuming it actually exists). The waters of the Columbia and the Pacific are frigid, but marine mammals thrive here. Our river is teeming with fish and both seals and sea lions make their homes in the river and along the coastline.

The water is much too cold for a marine reptile, but the idea of a plesiosaur on the Oregon coast is not that outlandish. In 2003, paleontologists discovered a plesiosaur skull near Mitchell, Oregon. This 25-foot-long reptile lived about 80 to 90 million years ago. Called the “Tiger of the Cretaceous Seas,” it was a top predator and a powerful swimmer. There’s a deep trench at the mouth of the Columbia. It is possible a similar creature could have survived and remained hidden, except for rare sightings?

Here’s something else to consider. Colossal Claude isn’t the only sea monster in the Pacific Northwest. There’s also Caddy (short for Cadborosaurus), a sea serpent allegedly living in Cadboro Bay in Greater Victoria, British Columbia. Then there’s the Ogopogo, a similar creature in Okanagan Lake in British Columbia. Both Caddy and Ogopogo are described as having horse-like heads and long necks. There have been over 300 reported sightings of Caddy, and the creature is often described as having anterior and posterior flippers. Interestingly, a Caddy-like creature has been found within the legends of indigenous people throughout the Pacific Northwest, from Vancouver to Alaska. The Inuit people put a picture of the creature on their canoes to keep it away.

What do you think? Does Colossal Claude exist? I don’t know if it does, but I have a feeling there are still a few mysteries lurking under the surface of the Columbia River.

This entry was posted on February 27, 2016 by Melissa Eskue Ousley. It was filed under Monster, Uncategorized and was tagged with legend, myth, Pacific Northwest.