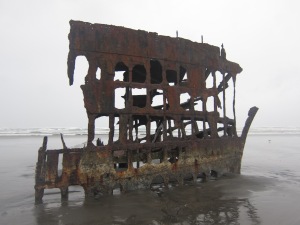 When I moved to the Oregon coast five years ago, the first place I went was to the wreck of the Peter Iredale. As I stood next to that rusted iron hull and dipped my toes in the frigid surf, I remember feeling blessed to live in the beautiful Pacific Northwest. I felt like I was finally home after wandering in the wilderness for many years. I turned forty last year, and started a new birthday tradition: to revisit that moment each year, sneaking away to the shipwreck to slip my feet into the ocean. A ritual to reflect on my life and express gratitude for the good things.

I celebrated my birthday this week, but didn’t have a chance to visit the Peter Iredale on the actual day of my birth. Twin storms blew in, and with hurricane force winds and twenty foot waves, the beach wasn’t exactly peaceful. I visited once the winds calmed down, but even then, I had to brave freezing rain to set foot in the shipwreck for a few short moments.

By the time I got back to the car, I was dripping—my hair completely soaked and plastered to my face—like I’d just stepped out of the shower and into a wind tunnel. I had a good laugh about my ill-fated adventure as I cranked up the heat and drove home. So much for serious self-reflection.

My forties have been good thus far—maybe my best decade yet. Not physically, as my worn out knees can attest, but definitely emotionally. I’m more at peace than I’ve ever been.

It seems like my twenties were all about reaching milestones: getting my education, obtaining the right job, traveling, getting married, buying a house, having kids. It was a race to be a grown-up, to prove myself. It’s not that I was trying to impress anyone in particular. I had goals for myself, things I felt I needed to accomplish to be whole. I managed to check off my to-do list just before I entered my thirties.

The first half of my thirties were rough, juggling the care of small children with a demanding job. I felt out of balance most of the time, and stress took a toll on my physical and emotional health. A major reorganization at work made things even harder. I felt broken, longing for change, clinging to faith so I wouldn’t lose hope. It was a dark time I wouldn’t want to revisit, but it served a purpose. I started writing and that kept me sane. Then we sold our house, moved from Arizona to Oregon for a job opportunity, and I found respite against chaos through a new life. As bad as things were, I’m glad I experienced them. I’m stronger now than I was, and without those stressful times, there might not have been an impetus to change. I realized I can’t live without writing. It’s something I have to do, even if that means writing late at night after working all day to pay the bills.

In the last half of that decade, three of my books were published. It wasn’t easy. I learned hard lessons, and I’m still learning. I’ve made mistakes, but in the process, I’ve become a better writer, and I’ve learned a whole bunch about marketing and social media. As tough as it’s been, I’ve relished learning. There were moments of self-doubt and despair to be sure—a sense of scaling an impossible obstacle, thoughts about digging a hole and wondering if I’d ever be able to climb out. Overall though, I feel energized by the challenges I’ve faced in building my writing skills and getting exposure for my work. I have lots of ideas for stories I want to write.

So now I’m forty-something. I’ve survived (in no particular order) a close encounter with a rattlesnake (and a bear—though not at the same time, and the bear wasn’t as scary), a fist-fight (I didn’t start it, but I sure as hell finished it), break-ups and make-ups, betrayals from close friends and admired mentors, a boss from the fiery depths of Hades, an equipment malfunction forty feet under the sea, a stalker, a hurricane, major surgery, and an endocrine disorder that will probably kill me if I don’t get hit by a bus first. I have constellations of scars, souvenirs of battle. (And so what? Lots of people have survived worse.)

But here’s the great thing about being in your forties, kids. You just don’t care anymore. I’m not saying I don’t care about people. I do. If I’ve adopted you into my fold, I love you unconditionally. It’s you and me against the world. I’m passionate about the people and things I love. But I’m not out to impress anyone. Not anymore. And that is liberating.

This is who I am. A little odd, probably not entirely sane, but content to be myself, and at peace with my life. I don’t feel the need to apologize for that, and I won’t cave to be something I’m not. I don’t have all the answers I thought I had in my twenties, but I’m okay with not knowing as long as I keep learning. I’m still driven to reach my goals, but I don’t feel the same pressure to make things happen. I’ve lived long enough to know nothing ever happens quite like you plan, and I’ve failed enough to know I can survive and things will work out eventually. This is me at forty one.

This entry was posted on March 11, 2016 by Melissa Eskue Ousley. It was filed under Self-reflection and was tagged with character building experience, flirting with death.

Error: Twitter did not respond. Please wait a few minutes and refresh this page.