I have this fantasy where I get rid of all my stuff and live in a tiny house. It’s a charming cottage, with cedar shingles and flowers blooming in window boxes. Most importantly, it’s free of clutter. What little I still own fits within its walls. There’s a place for everything and everything is in its place. I park it next to a lake, where I can go kayaking if I like, or maybe just lounge in a hammock and read. Or, if I feel like an adventure, I hook my house up to a vehicle and go. It’s a simple, serene life.

It’s not realistic right now. I have too much stuff. Books would be a problem—I own way too many books. (I have a conflicting fantasy about owning a library with a rolling ladder. I don’t think that would fit in my tiny house.) I also have a husband, two tween boys, a dog, and a piranha. It wouldn’t be easy sticking all of us and our stuff in a tiny house. Maybe this cottage fantasy is more of a retirement plan, and I can work on paring down worldly possessions bit by bit every year. 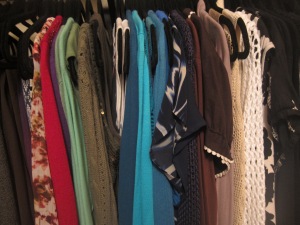 I did clean out my closet this weekend, getting rid of clothing I haven’t worn for a long time either because they don’t fit or are no longer in style. I felt an inordinate amount of joy over seeing my clothes arranged by type (dresses, jackets, pants, skirts, tops) and by color. I admit to being a little obsessive compulsive about such things. I try not to force the urge on the people I live with, though I did make my boys go through their clothes and toys and get rid of things they no longer use. The three of us stared at their neatly organized closet, amazed at how much better it looked, thrilled to be free of clutter, even though my sons would have preferred to spend their time doing other things. They are growing up differently than I did, without so much of an attachment to material goods. They still want stuff, but most of those things are virtual and don’t take up physical space. I don’t think that’s a terrible thing.

I went to a talk by Dee Williams, author of The Big Tiny. After a medical emergency, she realized life is short and chose to live simply. She sold her large house which drained her finances and required too much upkeep for someone with health issues. She built a tiny house, and parked it behind a friend’s residence, bartering space for help with an elderly relative. At her presentation, Dee brought a tarp with her home’s 84 square foot floorplan to demonstrate how tiny her house is. She has a composting toilet but no running water. Her friend lets her bring in water and shower. Running water is a must for me, but I could certainly appreciate a utility bill of less than ten dollars a month and that it would take about five minutes to clean the house.

In contrast, I recently watched a documentary on Iris Apfel. Now in her nineties, Iris is a business woman, interior designer, and fashion icon, known for her large, round glasses and style with layering accessories. She’s a force of nature in the fashion industry, setting trends and mentoring designers. She’s a collector too—curating shows about fashion at the Met. She’s a fascinating person with refreshing views on beauty. She said, “I don’t see anything so wrong with a wrinkle. It’s kind of a badge of courage.” I agree. In the film, she relates a story about how she used to frequent Loehmann’s, a shop in Brooklyn. The founder would sit on a high stool, observing customers. One day the woman called her over. She said, “Young lady, I’ve been watching you. You’re not pretty and you’ll never be pretty, but it doesn’t matter. You have something much better: you have style.” While that would have crushed some people, Iris took it as a challenge to use fashion to become interesting. She succeeded, and went on to live a fabulous, jet-setting life filled with dazzling couture.

Here’s what bothered me about the film though. At one point, Iris takes the audience for a tour of her warehouse, filled with racks of clothing and remnants from her interior design business. I couldn’t help but wonder—valuable as it may be, what does a person do with all that stuff? It was just sitting there, unused and gathering dust. I think that has less to do with Iris Apfel and more to do with people who grew up during the Depression, who had to go without. My grandfather was the same way, hoarding tools he might someday use, as well as things he hoped to sell.

After he passed away, my mother was tasked with cleaning out his house and discovered countless brass keys and aluminum cigar containers. He wanted to sell the metal, but never got around to it. He was a man of few resources who had to make his own way. He was never wealthy, but he built a home and a carpenter business, and he took care of his family. He held onto things because he knew bad times could return, and he wanted to be prepared.

I can understand that. Still, after seeing what a challenge it was for my mom to unload all that stuff after he died, I decided I want to live my life differently. I don’t want to be weighed down by material possessions, and I don’t want them to be a burden to people after I’m gone. I don’t think my grandfather ever meant to burden my mother—he took pains to make funeral arrangements before he died, so it would be easier for those left behind to grieve. After my grandmother died, he bought a plot next to hers and had a headstone made that they would share. It was already carved with his name—the only thing missing was the date of his death, to be added after he passed. Even so, his house still hasn’t sold, and my mother has to pay taxes on it. I doubt that’s what he wanted, but what can you do? You can’t force interest from a buyer.

Maybe the same thing will happen when I die—my kids will have an estate sale and then try to sell my house. I hope I’ll do things differently though. To me, it doesn’t make sense to hold on to things I’m not using. As I age, I want to purge extras from my life and choose to live simply. I hope I can downsize to my tiny cottage by the lake, free of all the possessions currently tying me down.

This entry was posted on March 25, 2016 by Melissa Eskue Ousley. It was filed under Self-reflection and was tagged with life lessons, material possessions, organization.

Error: Twitter did not respond. Please wait a few minutes and refresh this page.