Last night we placed a blanket on our lawn and watched the Perseid meteor shower. We had a good view on the Oregon coast—clear skies and no light pollution. Even though my boys are thirteen and already too cool for some of the things they used to enjoy, we all felt a sense of awe watching meteors leave brilliant trails of light on a black velvet sky. 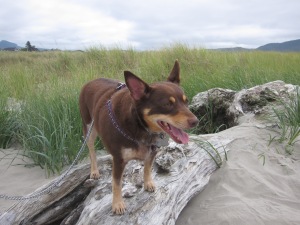 I love these moments. I know we’re too plugged in most of the time, each of us in our respective corners of the house. We’ve been better about unplugging this summer. One of my sons goes to swim practice four afternoons a week, so my other son and I committed to taking the dog for walks on the beach during that time. It’s been a good investment, if only for the chance to have deeper conversations with each other. We’ve enjoyed small discoveries—interesting rocks and shells, sculptural pieces of driftwood, washed-up jellyfish and isopods, and sculpin swimming in the estuary. One afternoon we didn’t walk at all, but stood mesmerized as we watched a whale breach over and over. It’s been good for the dog too, getting regular exercise. She’s a better dog for it, and we’re better people.

Even though my other son hasn’t been a part of our walks on the beach, we’ve included him in unplugging experiences too. We tried new restaurants and went roller skating a couple of times. He loves to read, so we’ve made weekly trips to the library. It’s been a great summer.

A complaint I’ve often heard about my boys’ generation is they can’t function without electronics—they always have to have a device in their hands, and they never go outside to play. They’re not social. They have no imagination. This is not true.

While my kids don’t play outside as much as I did, and they do love their phones and computers, that doesn’t mean they don’t like the outdoors. They do. Sometimes they just need a reminder to unplug, as do I.

They do have imaginations, and use them to create all kinds of art. Sometimes that art is made using pencils and paint, other times it involves a virtual canvas. They problem-solve constantly, whether it’s building worlds in Minecraft or solving puzzles in online games. They learn all the time. If they can’t figure something out, they research it using online resources. They watch videos about science experiments as well as silly stunts. They learn social skills, working with friends to win games. Yes, they are chatting over a distance, but they are still communicating. They talk to their friends in person too.

I think the biggest difference between their generation and others has to do with stuff. It’s not that my children don’t enjoy material belongings, but what they value is often virtual. They are not into physical toys. They still receive them as gifts sometimes, and they do play with them, but the enthusiasm is not the same as for online games.

When they were little, they enjoyed toys more. They had stuffed animals, legos, cars, dinosaurs, even toys they could ride. We had a lot of fun playing together, but every year we’d sort through the toys, passing along older toys to make room for new ones. Somehow we ended up with entire collections of Happy Meal toys—the other day I found one under the seat of my car. We got rid of boxes of toys and clothes before we moved 1,500 miles from Arizona to Oregon, but still, we had boxes and boxes that made the journey. In third grade, the boys’ teacher mentioned a project to give toys to other children. To my surprise, my kids were eager to participate. We went through their closet and collected five boxes of toys to give away. I was proud of my boys’ generosity, and amazed by their ability to let go of material belongings. It inspired me to go through my closet too. Letting go of my own belongings was a relief—it made me feel less weighed down. I wish I’d done more purging before we moved all those heavy boxes across the country.

Virtual toys are certainly lighter than physical ones, and they take up less room. I love that my boys don’t go crazy when we visit stores, wanting to buy more stuff. They see things they like, but they weigh the costs of purchasing them. They have learned to save their chore money for things they really want. This year one of my sons has made three major purchases with the money he’s earned: a video game, a fish tank, and a ukulele. The other, who hardly ever spends money, has only bought two items: a video game and an ocarina, which is a small, ceramic wind instrument.

The only problem with the boys not being into physical toys is gift-giving. While my husband and I know what games they’re into at the moment, it’s hard to translate this for relatives who are shopping for birthday or Christmas presents. To me, it feels selfish to ask for a gift card or cash even though the boys’ interests are so specific I know it will be nearly impossible for someone to find the exact gift they’ve been wanting. Asking for that feels like a demand, even though I prefer gift cards because they don’t take up space and they save on shipping costs for the giver. I also feel we shouldn’t make demands about the amount spent—it’s about being thought of by the giver.

I actually wish people wouldn’t give me gifts at all—just send me a note with kind words or give the money that would have been spent on a gift to a charity. I have everything I need, and the few things I want, I tend to buy for myself. I have more than enough. I know it’s not fair of me to force that idea on other people, however—on my kids or the people who give them gifts.

I don’t have an answer about how to handle the gift issue except to make gentle suggestions to givers and to teach my boys to be grateful receivers. And to periodically go through our stuff and pass along what we no longer need.

This entry was posted on August 13, 2016 by Melissa Eskue Ousley. It was filed under Self-reflection and was tagged with life lessons, material possessions, parenting.