I love, love, LOVE this gorgeous cover from Filles Vertes Publishing. They are a wonderful publishing team. 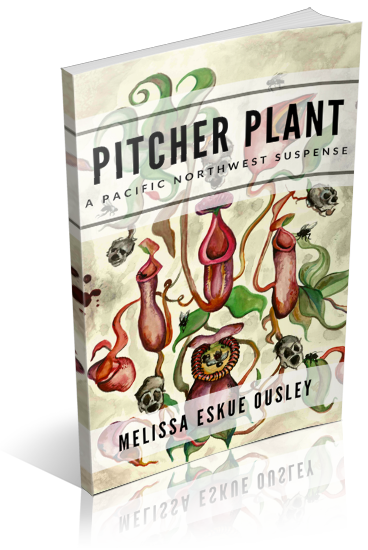 Pitcher Plant
noun
a plant (especially family Sarraceniaceae, the pitcher-plant family) with pitcher-shaped leaves in which insects are trapped and digested by means of a fluid secreted by the leaves

Pitcher plants are carnivorous plants and are used throughout the book as a metaphor to represent the idea of being lured into a situation you thought would be good, but is actually a trap. Like buying a charming old house with the idea of renovating it, only to realize it’s a money pit. Or falling in love with the wrong person.

For the cover of Pitcher Plant, we were thinking about Victorian curiosity cabinets, and how they were both sophisticated and macbre in displaying botanicals like carnivorous plants, insects pinned under glass, and taxidermy. That was our guiding vision, and I think we pulled it off with a cover that is both elegant and subtly creepy. I’m proud to work with FVP, and so grateful for their hard work on this book. You can preorder it here.

I hope you’ll celebrate our launch day on May 12 by joining us at our release day party on Facebook. Stop by from 6-10pm EDT, and enter to win all kinds of amazing prizes, including a signed copy of Pitcher Plant, a Seaside-themed gift pack, a $10 Amazon gift card, manuscript critiques (for those of you who have novels in progress), and more.

In the meantime, let me whet your appetite with a description and an excerpt from the book.

When Tawny Ellis spots a fixer-upper on the Oregon coast, she and her husband jump at the chance to own a cottage near the beach. But as expensive repairs turn their dream home into a nightmare, their marriage unravels. And worse…the house is not quite vacant. Something in the house’s dark past remains.

Tawny’s daughter has a new imaginary friend, and she bears a striking resemblance to a little girl who squatted in the cottage with her drug-addicted mother. After breaking in and camping out, they vanished, and have been missing for years.

Now the house’s previous owner is enraged with Tawny. As he stalks her family, Tawny suspects she knows what happened to the last people who slept in the house. Her family might be next.

I was falling in love with this fixer-upper, but before we made an offer on the house, I had to check out the basement. I clicked on the light and stepped over the threshold, into darkness. Floating dust motes filled the air, dancing in the flashlight’s beam.

The room before me was expansive, running the length and width of the house. On one end was a wooden stall for firewood, still stacked with logs. They’d come in handy if we restored the fireplace, though I didn’t look forward to cleaning off the cobwebs covering them. The other end of the basement was stacked with junk and garbage, similar to what we’d encountered upstairs.

Everything was blanketed with a thick layer of dust. My nose was stuffy—all the dust triggering my allergies. I made a mental note to take an antihistamine when I got back to the car. Otherwise I’d be paying for this excursion tonight, when my sinuses were too clogged to let me sleep. I just hoped there wasn’t any mold down here. I’d heard horror stories from my neighbor about getting mold removed from her home. The procedure had been costly, and if we got this house, it’d cost us enough as it was.

I ventured a little deeper into the basement, shining my flashlight on the pile of junk. I could make out an old wooden trunk. Did that come with the house? Maybe I’d clean it up and use it for a coffee table.

The beam of my flashlight fell on a tattered ragdoll. The doll’s fabric face and its light brown yarn hair looked dingy. Its flower print dress was dotted with rust colored stains and black flecks. The flecks looked like rodent feces.

There was a rustle to my right, and I startled, swinging my light toward the sound. Given the state of the doll’s dress, I thought it might be a rat.

Suddenly the air was thick with flies. I clamped my mouth shut as they flew toward my face, waving my arms madly to keep them away. They crawled in my hair and buzzed in my ears, and I bit back a shriek. The beam of my flashlight flickered as I used it to swat the flies. I shuddered at the thought of it going out and having to find my way back to the stairs in the dark.

I stumbled back toward the corridor that led to the door of the basement, trying to see through squinted eyes, the cloud of flies, and the dying light of the Maglite. As I reached the passage, the buzzing sound eased, and the flies began to drift back to whatever attracted them to the basement.

I dared one last look, directing my beam to the offending corner of the basement. The dirt floor was carpeted with insects. Flies and other crawling things, though I was too far away to tell what they were. There seemed to be a small lump on the floor that attracted their interest. A dead rat, most likely, but there was no way I was going back to find out.

Thanks for reading, and my thanks especially to all of you who have been spreading the word about Pitcher Plant. I’m so excited to share this book with you.

This entry was posted on May 5, 2017 by Melissa Eskue Ousley. It was filed under cover reveal and was tagged with beach, Books, cover, Filles Vertes Publishing, new release, Pitcher Plant, Seaside, suspense.