It’s been a great two weeks since Pitcher Plant launched! I truly appreciate all the good wishes and support, especially from those of you who attended our online release party, made it to a book event, spread the word, left a book review, or bought the book. You may not realize it, but you did a good deed. Not only did you support this indie author, but a portion of proceeds from sales went to support students seeking a college education through the Lives in Transition Program at Clatsop Community College. I can’t thank you enough.

I can, however, share more about Pitcher Plant. Here’s another excerpt. I hope you enjoy it.

Climbing up the back steps of the house, we faced our first sign the house required more fixing than Mr. Peterson indicated. The back porch looked like it had once been enclosed, but was now a shell of two-by-fours containing the battered remains of a powder room. The exposed toilet was covered in rust stains and mold, and a spider web stretched over the bowl of the sink. Large black flies hovered around the bottom of the toilet stool and crawled through a crack between the floorboards.

“Guess we can add bathroom to the list of repairs,” I said, frowning as I snapped a photo.

“Deadbolt and doorknob too,” Mark muttered.

I glanced over to see him dialing in the combination. Sure enough, there was a round hole where the doorknob should’ve been and the deadbolt mechanism was missing. Mark slid the combination lock into his pocket and wrenched the door open with both hands. It squealed on rusted hinges, which looked as though they might crack in two at any moment. The wood on the door looked warped. “Maybe a new door as well,” I added.

Mark scowled at it, and then stepped inside the house. The crease between his eyebrows deepened as he took in the kitchen.

In a word, it was a nightmare. Like the back porch, some of the cabinets were hollow shells, with broken shelves and no doors. One of the upper cabinets listed so badly I was convinced it might fall. I turned in a slow circle, taking photos to document what would need to be repaired. The countertop was splintered plywood. There was a stove, and surprisingly, a dishwasher, but no refrigerator. The floor looked like it’d once been tiled but someone chipped it away, leaving only curving lines of dark mortar. I chanced a look at the sink and immediately wished I hadn’t. The skeletal remains of some rodent lay on the dirty porcelain bottom, surrounded by a halo of wiry brown hair and chunks of decaying flesh. I started to retch, and covered my nose and mouth.

“What?” Mark asked. He’d peaked at the electrical outlets behind the stove, directing the beam from his Maglite between the appliance and the wall.

“Rat,” I managed, and pointed at the sink. I backed away and gulped in air that didn’t hold the stench of death.

Mark crossed the kitchen. “Lovely.” He looked as disgusted as I felt.

“One would think, if you were selling a house, you might at least clean it up,” I said, eyeing the sink from a safe distance.

“One would think,” he agreed. He sauntered over to what looked to be a pantry or broom closet, and yanked open the door. It came off in his hands, leaving him holding the knob and struggling to brace the door before it slipped from his grip. He clucked his tongue and carefully leaned the door against the wall beside the tiny closet. Judging by the look on his face, this house wasn’t winning him over.

It was a look I knew well—he’d give me the same expression of disapproval whenever I suggested we break from our routine and do something novel, like try the new pizzeria in town or drive down to Cannon Beach to check out a new art gallery. Mark wasn’t a fan of change. I thrived on it. I told myself it was just one of those things between people who’d been married a long time. One partner wants to try something new, the other doesn’t understand why things can’t stay the same way they’ve always been. I’d learned long ago when Mark got that look on his face, the best thing to do was to give him space, let him stew awhile. He’d come around.

Leaving the kitchen, I stepped into a large room that seemed to be a combined living room and dining area, and took more photos. Beautiful windows were set into walls paneled in Douglas fir. I remembered the description of the paneling from Mr. Peterson’s ad—he’d described it as a rare feature, and said it added to the beauty of the house. He was right. The paneling gave the room a warm, welcoming feel, which was a nice change from the horrors I’d encountered in the kitchen. I imagined the ramshackle house not as it was, but as it could be—a vintage beach cottage with airy furnishings and maybe even an outdoor shower to wash the sand from our feet.

Along one of the living room walls it looked like there’d once been a fireplace—what if we restored it? I envisioned a hearth made of river rock, and smiled. Maybe the place had potential. The kitchen was a mess, but we could gut it and turn it into exactly what we wanted. It was a blank slate.

I glanced toward the kitchen, where Mark inspected the pipes under the sink. They were rusty and he looked annoyed, muttering under his breath. I sighed. I couldn’t fall in love with this house yet. Not before my husband rendered judgment.

That was another problem with us. I was a glass-half-full kind of girl and he was a perpetual skeptic. He thought I got too swept up by romantic notions, and I wished he’d live a little, and not be so maddeningly practical all the time. Still, he was here, playing along at least. Perhaps this time we’d meet each other halfway. I could stand to be a little more reserved, and maybe he’d get inspired by the house’s potential—maybe.

I returned my gaze to the large living-slash-dining room—the great room, as I’d started calling it in my head. An arched door with dirty glass panels seemed to lead to a hallway, and a set of French doors led to another room. The light fixtures in the ceilings were removed, and scary-looking wires poked willy-nilly from the ceiling. The electrical system in the house definitely seemed to have issues, as Mr. Peterson had mentioned. I walked over to a smaller door next to the one leading to the hallway and opened it.

It was a closet under the stairs, the bottom of the risers draped with cobwebs. Gross. The floor of the closet was worse though. It was covered in junk—trash, discarded clothes, toys, and even a collapsed umbrella stroller for a toddler. I wondered who lived here before, and why Mr. Peterson hadn’t taken the time to throw out this stuff before putting the house up for sale.

A thump startled me. I scanned the trash on the closet floor and spotted droppings. There was probably another rat, a live one this time. Shuddering, I shut the closet door. There was another thump—too heavy to be a rodent. The thumps continued, and I realized they sounded like footsteps.

We weren’t alone in the house. 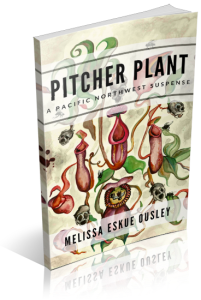 This entry was posted on May 27, 2017 by Melissa Eskue Ousley. It was filed under Pitcher Plant and was tagged with book launch, charity, excerpt, horror, indie, karma, mystery, release week, support, suspense.