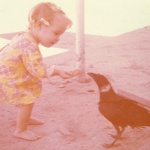 This is the story as it was told to me by my mother. One morning when I was seventeen months old, she and I went into the backyard of our house in southern Arizona. She was hanging laundry to dry in the warm desert air, and I was standing in my nightgown, my hair in curlers, munching crackers.

She turned to find me chattering at a Chihuahuan Raven, sharing my crackers with it. In Bible school, I’d heard the story of the prophet Elijah, who took refuge in the wilderness when he was hunted by a wicked queen. Ravens were sent by God to bring him food during his time in exile. I’m not sure how much of the story I understood at that age, but apparently I decided to return the favor, and feed this bird.

I communed with the raven for quite a while, long enough for my mother to run back in the house and grab a camera. The raven, an opportunistic feeder, was intelligent enough to know that a little girl with crackers wasn’t a threat.*

To this day, I feel a sense of awe around ravens, and feed them when I have a spare crust of bread. I still chatter at them too, and sometimes they talk back, in their own way. My early experience with a raven is why ravens and crows are special to me, and why I feature a raven as a character in my fantasy series, the Solas Beir Trilogy.

*If you’re a fan of corvids like I am, check out my previous post, On Ravens. Also, I highly recommend the book, Gifts of the Crow.