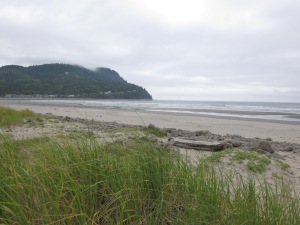 One reason I decided to set Pitcher Plant, my new suspense novel, in Seaside is because I adore this little beach town. The Oregon coast is gorgeous, and Seaside is a city with a lot of charm. It’s no wonder we get an influx of tourists when the sun comes out.

Seaside has almost two miles of beach, starting at the Necanicum Estuary, where wild elk like to forage, and stretching to the Cove, a popular surfing spot. Bordering the beach is the Promenade (or the Prom, as locals call it). You can walk the Prom, rent a surrey to bicycle through town, or cruise the Necanicum River in a paddle boat shaped like a swan.

One of my favorite places on the Prom is the Seaside Aquarium, a spot I mention in the book. The aquarium opened in 1937 and is best known for its seals. For a few dollars, you can purchase a cardboard tray of fish to toss to the seals. It’s quite an event. Each seal has their own way of getting your attention, from slapping their bellies to splashing unsuspecting tourists.

I also love the touch tanks, where you can get a closer look at the organisms in our tidepools—sea stars, crabs, sand dollars, anemone, and sea cucumbers. The aquarium does a great job displaying local wildlife, from wolf eels to small sharks.

My absolute favorite creature is the giant pacific octopus, hanging out in the center of the aquarium. There’s no lid on her tank, so you can have a close encounter, staring into her intelligent eyes. I’ve often wondered, once the tourists leave for the night, does she ever leave the pool and go exploring?

This week I turned 42. To celebrate, my two thirteen-year-old boys and I seized the day and visited the Point Defiance Zoo in Tacoma, Washington to dive with sharks. I’m a certified diver, so the idea was not terrifying to me. The last time I was in the ocean with a shark, I was diving at Michaelmas Cay in the Great Barrier Reef. I got close to a four-foot black tip reef shark. I absolutely loved that, and couldn’t wait to get in the water with something a little bigger.

My kids weren’t sure about joining me at first. They’re great swimmers, not at all afraid of the water, but sharks? The idea gave them pause. So, I did what any good parent would do—I begged, pleaded, and manipulated them until they said yes. I’m kidding…sort of. We talked about the experience and risks, and I assured them they’d be okay.

When we got to the zoo, we checked out the aquarium so the boys could see the sharks before we got in. They were a little bigger than we expected. The sand tiger shark was over ten-feet-long, and with a mouth full of ragged teeth, he looked intimidating. The boys weren’t scared though. Due to my obsession with sharks and their own love of animals, they knew that sand tigers were docile—more puppies than monsters.

The cage-diving experience at the aquarium is set up to accommodate those with little or no experience diving. We would wear our street clothes under dry suits, so just our heads, hands, and feet would get wet. We wouldn’t have to use tanks. Instead, air would come to us through long hoses. All we had to do was follow directions, kneel at the bottom of the cage, and breathe. We were given a presentation beforehand about what the experience would be like, and what kind of sharks we’d encounter. The aquarium has five species of sharks in their large tank: the sand tiger, nurse sharks, sand bar sharks, a black tip reef shark (just like my Australian friend), and a wobbegong, a kind of shark that lies on the bottom of the ocean. The zoo also has a zebra shark which will be introduced to the big tank in a few years, once she grows bigger. Zebra sharks really are sea puppies—seriously adorable and kinda goofy. They like belly rubs too.

We were told that if we were comfortable, our safety diver would open the cage during our dive, so we could get even closer to the sharks. We were warned, however, that one of the sand bar sharks had a habit of swimming right up to the cage, like she was going to come inside. “She’ll veer off at the last second, though,” our dive instructor said.

We dressed up like aquanauts and donned our masks. After slipping regulators in our mouths, we sank to the bottom of the cage, wide-eyed and excited as we watched the sand tiger and black tip reef shark glide past. During the middle of the experience, the safety diver used hand gestures to ask if we wanted the doors open. We all gave her the okay signal right away. Heck yes, we wanted the cage door open. Let’s do this thing.

Then, across the tank, I saw that sand bar shark coming. My eyes were locked with hers as she swam right up to us, no fear. She got within a foot of one of my sons’ faces before switching directions. I looked over at him and used hand signals to see if he was okay. He nodded, grinning underwater. 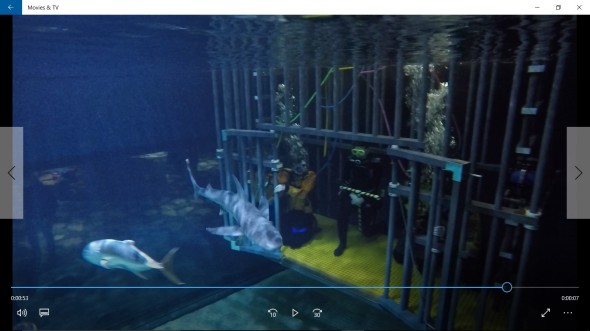 After the dive, I asked him if he’d been scared. “Not at all,” he said. He’d felt a rush of adrenaline, and actually wanted to get closer. He had to keep his hands on the bars of the cage to resist reaching out and touching the shark. You and me both, kid. You and me both.

I think we’ll be coming back to this zoo, for another round with the sharks. Maybe next time, all three of us will be certified, and we’ll be able to leave the cage to sit on the bottom of the tank as the sharks swim around our heads. In the meantime, I’m thrilled to know my boys have developed a love for sharks and a new appreciation for nature. This was the best birthday I’ve ever had.