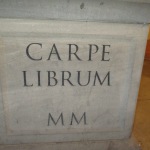 The best thing about playing tour guide is you see things anew through other people’s eyes. My brother had a business trip in Portland this week, so I made the two-hour trek from the coast to meet him for dinner. We drove over to the Pearl district, and as we were paying for parking, I heard the sound of bagpipes. 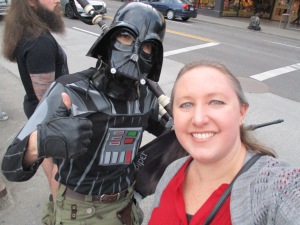 “He’s this dude who rides around Portland on a unicycle, wearing a kilt and a Darth Vader mask, while playing bagpipes that shoot fire,” I explained. And sure enough, as we crossed the street, we ran into the man himself. The Unipiper was gracious, letting me take a photo with him and giving my brother a keychain before pedaling on his merry way. A pretty good ambassador for the city.

Then we walked into Powell’s City of Books, and I realized we weren’t finished yet. There was much more to see. If you’ve never been to Powell’s, you should remedy that posthaste. It had been too long since my last visit, and I’m glad we went. The first thing we saw was a display dedicated to all things Oregon: t-shirts, magnets, cutting boards, jewelry…whatever your tourist heart could desire. They even had Bigfoot air fresheners. What more could you want, really? Stegosaurus taco socks? Fine, done. They had those too. Along with posters, book bags, and all kinds of geeky accessories that made me want to blow my paycheck. 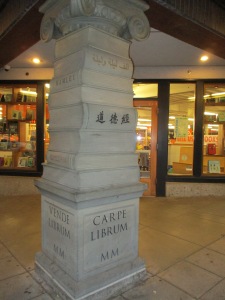 I managed to resist, and chose one book to bring home, after my brother recommended it. Ready Player One was a book I’d always meant to read, but hadn’t, so it was nice to have a reminder. He asked me for recommendations on books from Oregon authors. I was thrilled to point out books from writers I love: Chelsea Cain, April Henry, Ursula K. LeGuin, and more. It’s such a joy to talk books with someone and find out you adore the same authors. You love Jim Butcher too? No way! Powell’s is so huge we didn’t even make it to the upper floors. When his arms were full of books and my stomach started growling, we walked over to a pub to eat and chat some more.

Living 1,500 miles apart, we don’t see each other often, so it was great to catch up. Of course, I tried to sell him on moving north by gifting him a book on weird places in Oregon as well as a sand dollar from one of my favorite beaches. I stayed later than I meant to, and didn’t get home until one in the morning, but it was worth it to spend time with my brother.

Driving down the Sunset Highway in the middle of the night, surrounded by trees and patches of fog, I kept an eye out for Bigfoot. It seemed a good night for spotting him. There was a full moon and I’d had a fortuitous encounter with the Unipiper earlier, so why not? Alas…no such luck. My air freshener will have to suffice.

Monsters of the PNW: Sasquatch 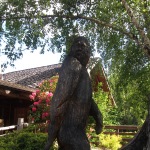 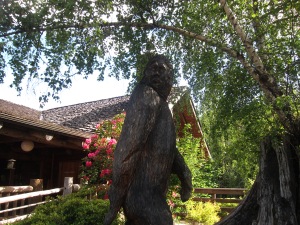 You see sasquatch everywhere in the Pacific Northwest (as an icon, at least). On the Oregon coast, we’ve got Bigfoot’s Steakhouse, and the Elderberry Inn on the Sunset Highway sports the silhouette of a sasquatch next to a giant frying pan. Camp 18, another restaurant along the same highway, is known for its logging museum and carved sculptures. Among these are two sasquatch statues.

A fellow author who has written about sasquatch once told me the area around Camp 18 is a sasquatch hotspot, with a number of sightings having been reported over the years. I can understand why—halfway between Portland and the coast, the restaurant sits in the middle of a vast forest in the Coast Range.

As you drive along the highway, you can see swathes of open land, where timber has been harvested. For the most part, however, the mountains are still pristine, some areas seemingly impassable because they are so overgrown with trees and vegetation. It’s easy to imagine large animals thriving unseen in these wild places.

I have never seen bigfoot in those woods (or anywhere else), but I think it’s possible a large animal could exist in a place like that and be seen only rarely. Bears, wolves, and mountain lions live in our forests, but I’ve never seen any of those animals up close, though I’ve been hiking trails on the coast for nearly five years. I have seen plenty of elk, deer, and raccoons, but no sasquatch.

It seems other people have seen something though. If you go to OregonBigfoot.com and search by county, you can read about alleged sightings and get a clear idea about where they occurred. I don’t know how many, if any, of the reports are credible, but I’ll give you this: it is eerie to read about sightings occurring in places I’ve hiked.

Evidence about sasquatch has never been accepted by the scientific community, but I’m fascinated by the legends, especially those from indigenous people. Native Americans in the Pacific Northwest have acknowledged sasquatch’s existence for centuries. Skookum, a word referring to spirits, was also used to describe sasquatch. There are stories about Basket Woman, a cannibal ogress who kidnapped children and put them in her basket. I don’t know how hairy she was, but it’s interesting that she was a giant. And, of course, there is Ape Canyon at Mount St. Helens, where a number of sasquatch sightings have been reported.

I don’t know if sasquatch exists, but I would like to think it does. I love the idea that there are still puzzles to be solved, that, in spite of all our technological advances and global exploration, mysteries remain.