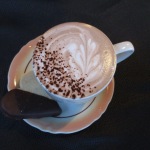 I got to spend last evening with some lovely, lovely writers at a book event at the Blue Scorcher Bakery. (I highly recommend the Scorcher’s hot chocolate, by the way. So rich and creamy. Their shortbread and pizza are also amazing.) We had a great group of authors, offering something for every reader: Matt Crichton, Heather Douglas, Kestrel Gates, Andrea Larson Perez, Angela Sidlo, Deb Vanasse, and me. That’s one of the best things about attending these kinds of events—besides talking with readers—hearing from other writers about their lives and writing process.

As I went around saying hello, a couple of conversations stood out. Angela Sidlo, coauthor of the bestselling anthology, The Silver Linings Storybook: Successful Leaders Share Inspiring Stories of Overcoming Stormy Days in Personal and Professional Life, had this sage advice for aspiring writers: “Write every day, even if it’s just a series of random thoughts, and never give up!” Angela and I also talked about developing characters, and how sometimes, when you are immersed in writing, trying to see the world of the story through your character’s eyes, they almost seem to come alive. You start to visualize their universe and hear their words. That probably sounds crazy to non-writers, but in my experience, it’s true. I’ve learned to let go of my preconceived notions about how a scene should go, and let the characters drive the dialogue and action. The story is always stronger and more authentic for doing that.

Another piece of advice that struck me was from Diana Kirk, author of Licking Flames: Tales of a Half-Assed Hussy. Diana’s book is a series of essays about feminism, family, travel, owning a business, and embracing sexuality. It is raw, honest, and at times inspiring, heart-breaking, and laugh out loud funny. One thing I love about Diana is she is fearless. Fortune favors the bold, and that is certainly true for her. I’ve seen her take risks in seeking out opportunities, and her courage and confidence have paid off. That’s why I love her advice for would-be authors. “Don’t be afraid of rejection,” she said. You have to put yourself out there and be vulnerable if you want to progress in your writing career. Rejection is part of the job, whether it’s submitting your manuscript to agents and publishers, asking another author to blurb your book, having your book critiqued in a review, or sitting at an event and trying to convince readers to purchase your book. It’s not easy to push fear and self-doubt aside, but you have to do it if you want to keep moving forward. Seize the day, writers. 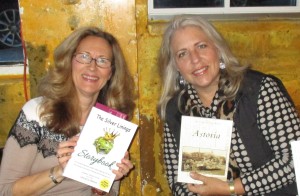 Deb Vanasse signing a book for a reader.

What two things go well together? Artisanal breads and books! Join me and other local authors at the Blue Scorcher Bakery during the Second Saturday Art Walk in Astoria, Oregon. The event will be held on Saturday, February 11, from 5:30pm-8:30pm, at 1493 Duane Street. You can find a great new read and have it signed while you enjoy gourmet treats. This is a free event for readers of all ages. 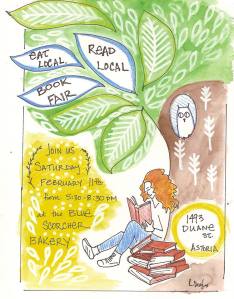 I have a degree in engineering, have been a member of AmeriCorps and Peace Corps, worked at the YMCA teaching computer-based projects, and am currently pursuing a teaching (math!) certification. I like music, yoga, and cooking, and building fires on the beach. Somewhere along the way, I picked up poetry. Or maybe I should say it picked me up. Many of the poems I write come unexpectedly and I had better have a scrap of paper nearby or it will be lost to eternity. I write to express feelings, in response to lived experiences, to get the words that bug me out of my head. I write when inspired. I do not have a specific day or time I write. I wait for the lightning. I believe everyone should write if they are inspired. You never know who or how your words will affect.

Heather Douglas is a writer, illustrator and educator and the author of two coloring books, That’s So Pacific Northwest Coloring Book, My Astoria Coloring Book and one book of poetry entitled Creosote and Rain. She was a Writer in Residence through Astoria Visual Arts in fall 2016 and also writes for Coast Weekend, ESL101, Medium and is creator of local blog Astoria Rain (dot) com. Writing, creativity and old growth forests keep her sane and grounded in this crazy world. More of her work can be found on Oscar Astoria (dot) com.

Melissa Eskue Ousley is an award-winning author living on the Oregon coast with her family, a neurotic dog, and a piranha. Her debut novel, Sign of the Throne, won a 2014 Readers’ Favorite International Book Award and a 2014 Eric Hoffer Book Award. Her third book, The Sower Comes, won a 2016 Eric Hoffer Book Award. Sunset Empire, a fantasy set in Astoria, debuted in the bestselling Secrets and Shadows young adult boxed set. Pitcher Plant, a mystery set in Seaside, will be released this spring. Her short stories have been included in Rain Magazine and The North Coast Squid. When she’s not writing, she can be found walking along the beach, poking dead things with a stick.

Diana Kirk, author of Licking Flames: Tales of a Half-Assed Hussy has been published in Thought Catalog, Nailed, Literary Kitchen and is a regular contributor to The Psychology of It and Five 2 One Magazine. When not writing personal or feminist essays, she’s pretty busy wifing, mothering and running two investment firms from her super fancy basement office. 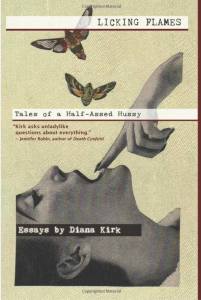 Andrea Larson Perez, 52, relocated to the lower Columbia region in 1994. She has lived in Astoria, Oregon since 1997. A native of St. Petersburg, Florida, she is married and a mother of two sons, 26 and 23.  She graduated from California State University, Sacramento with degree in Public Relations and a minor in Journalism.

After nearly 30 years serving clients in communications capacities, Andrea decided to turn her attention to writing.  Her first book with Arcadia’s Images of America Series gave her an opportunity to dig into interesting local history at Camp Rilea where her husband, Col Dean Perez, was the Post Commander.  Her interest in history and keen research abilities helped immensely in compiling and editing  the first published history of Camp Rilea.  Many supported and encouraged the process, most notably the past and current staff at Camp Rilea and the Oregon Military Department.

Her second title is part of Arcadia’s Postcard History Series focuses on vintage postcards of Astoria, Oregon.  Having been a collector and postcard enthusiast for many years, her interest connected her to other local collectors and was a “natural” to become a book.  It has been very well received and is headed to a second printing!

Andrea is currently considering a third title with Arcadia.

When not enjoying time with family or traveling, Larson Perez spends a good deal of time researching her family tree looking for stories to tell about characters she meets.  Happy to be known as the “family historian,” she has uncovered many previously unknown facts about her ancestors who arrived in colonial America in 1630.

She enjoys membership in the Astoria Chapter of the Daughters of the American Revolution and serves on the Board of Directors of the Astoria Co-Op Grocery and The Astoria Ferry.  She also participates in many community organizations, activities and events.

Sidlo coauthored in Volume 1 & 2 of the new storytelling series, to share her story of self acceptance through hormonal imbalances, depression and fibromyalgia. Through her experiences she has developed programs and products as a health coach and aromatherapist to assist women who want to lose weight, balance hormones and live the life they dream of. Sidlo believes that “Healthy Individuals Create Healthy Communities”.

A recent transplant from Alaska, Deb Vanasse is the author of seventeen books.  “Vanasse is talented,” says Foreword Reviews. “She can turn ordinary words into the sublime.” When she’s not at the keyboard, you’ll find Deb walking the beach with her dog, tending her vegetable garden, or immersed in a book. 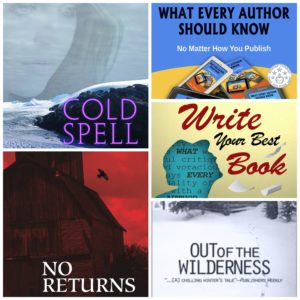 Thanks for reading. Hope to see you at the Blue Scorcher!