Remember the Greek myth about Icarus? He and his father were imprisoned in a labyrinth, and escaped by making wings out of wax and feathers. Then, elated by the success of the plan, Icarus got carried away and flew too close to the sun. The wax melted and he fell to his death. I guess the lesson here is to keep one’s hubris in check. Pride comes before the fall.

I can relate. I try not to be an arrogant person, but I do take pride in my accomplishments. I don’t think that’s a terrible thing because I’m goal-driven, and I try to see the silver lining when faced with obstacles. I consider myself an optimist, continuing to strive in spite of challenges. I’m also a realist—experience has taught me that even though I hope for the best, I should prepare for the worst. Something is bound to go wrong.

Seems like every time I think I’ve got it together, the universe is quick to school me in humility. Case in point, my career as a high school cheerleader. I’m not the most athletic person, so some of the jumps we did were a challenge for me. The pike? Never going to happen. I could do a high kick though, so I came up with this signature move combining a hurdle jump with a high kick. I was pretty proud of myself until one football game, when I performed said jump kick and fell on my butt in front of the entire town. I scrambled to my feet, brushed myself off, and pasted a smile on my face, trying to convince myself that only half the high school saw me wipe out.

I’ve come to believe I’m cursed. It doesn’t matter how many degrees I earn or how many awards I win, if I start to soar too high, I’m sure to crash. I guess the universe doesn’t want me to get cocky. Being an author is a continuous lesson in humility by the way—there’s plenty of rejection to be faced even after you get published, between trying to get reviews for your book and trying to find gigs. To say one needs a thick skin is an understatement. You need a suit of armor.

I once approached a venue about a speaking gig, and got turned down. Three books later, I finally earned enough credibility for the venue to invite me to come and speak. I was excited. I came early, armed with an excerpt to read and books to sign. Unfortunately, fate had other ideas. My name was misspelled twice—my last name on a sign outside, and my first name on a poster inside. I think I’m justified in feeling annoyed about that, since my name was right there on the cover of the book, prominently featured. Nevertheless, I was grateful for the gig, and chose not to say anything.

There weren’t a lot of attendees, so when a woman walked in right before the event was set to begin, I was thrilled. She took one look at me and said, “You’re not Melissa (insert somebody else’s last name here).” Her tone was slightly accusatory, as if she had been duped and it was my fault for not being the expected Melissa. “No, I’m not,” I said, giving her what I hoped was a winning smile. I proceeded to explain who I was and what my talk was about. I then invited her to join us. She let me finish my little speech, and then, without a word, turned around and left. Her abrupt exit was so unexpected and rude, I couldn’t help but laugh. Sometimes that’s all you can do.

Then there was the time I interviewed for a position as a professor. I flew out to San Diego and put on my best interview clothes, a navy jacket and skirt with a cream top, and a pair of expensive leather heels I’d splurged on. The stilettos were killer. They elevated the outfit and boosted my confidence. They were also my undoing. 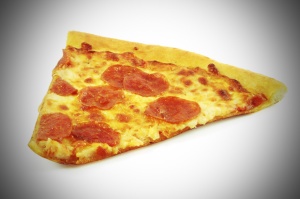 I sailed through the interview, and was feeling pretty good about things when one of the other professors took me to lunch. After that, I was due to come back to campus to make a presentation, so the interviewers could gauge my teaching abilities. We drove to the restaurant in her car, and she parked next to an island dividing the lot. When I got out of the car, I found the woman had parked close to the curb, so I had to step onto the island, which was covered in small plants. I tried to tread carefully so I wouldn’t trample the ground cover, and successfully made my way around the side of the car to where the professor was waiting. We started walking toward the entrance of the restaurant and suddenly, I noticed my foot was caught on something. Someone had tossed a slice of pizza into the low plants, where it was hidden from view, and my stiletto had speared it. As I walked away from the parking island, I dragged the pizza slice along with me. Are you kidding me? I asked the universe, as I frantically tried to keep up my end of the conversation while discretely using the toe of my other shoe to pin down the pizza slice, so I could free my heel. I’m pretty sure the woman noticed. I didn’t get the job.

I don’t know why these things happen. I know bad things happen to everyone, so maybe I’m not truly cursed. The rain falls on the just and the unjust, no? (And of course, things could be worse. Things have been worse, and I keep getting up each time I get knocked on my rear end.) Maybe spearing the pizza slice was God’s way of letting me know that wasn’t the right job for me, that I wouldn’t have been happy on the tenure track. Maybe the challenges I face serve to guide me, to push me in a new direction I wouldn’t have tried otherwise. I just wish I could learn these lessons without damaging my pride.