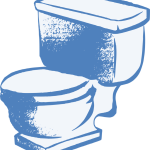 If ghosts exist, how do they spend their time? Are they mindless apparitions, reliving the last moments of their lives, or self-aware, watching us live ours? I think they may watch us.

Last week I posted about seeing a shadowy figure in Old Main. That wasn’t the only unsettling experience I had while working in that building. There seemed to be a presence in the bathroom, which makes the idea of being watched all the more unnerving.

The ladies restroom on the ground floor of Old Main was small–it only had two stalls. The one furthest from the door was larger, designed to be accessible for people with disabilities. On the surface, there was nothing spooky about the room. There was a tall window set in the exterior wall, where the larger stall was. The window was frosted for privacy but still provided plenty of light. There was nothing visibly creepy about the restroom–the walls were painted a pristine white, so there were no dark and gloomy corners where something could hide.

However (and there’s always a however, isn’t there?), whenever I used the smaller stall, I always got the sense that the larger stall was occupied–that I wasn’t alone in the restroom, even though I could clearly see that no one was using the other stall. Still, the feeling of someone being there was so tangible, I’d find myself peering down, looking for feet in the other stall. It was an odd feeling, but one I kept to myself out of fear of appearing paranoid.

Then, one day, a co-worker came into my office and said, offhand, “You know, it’s the weirdest thing…” and went on to describe exactly what I’d experienced. We decided, given that our experiences corroborated with each other, and considering other ghostly rumors we’d heard about the building, that there could indeed be a nosy bathroom ghost, à la Moaning Myrtle. You would think the idea of being watched while doing our business would have caused us to use the upstairs restroom instead, but it didn’t. Hey, when you gotta go, you gotta go.

The Ghost of Old Main

Academia is the last place I’d expect to encounter the supernatural. While working at the University of Arizona, a school dedicated to scientific inquiry, I had a number of experiences I can’t explain. Before I became a writer, I was a researcher there, and I worked in Old Main, the oldest building on campus. It was a beautiful place to work, with tall windows and a veranda that wrapped around the entire building. On one side was a lovely garden with a fountain. I worked on the first floor, which boasted gorgeous tin ceilings. The building had character, and I felt privileged to work there.

One Saturday I came in to catch up on a research project. The long hallways were dark. I turned on a few lights and checked out the place, locking the doors for safety, since I was there alone. I didn’t want to be vulnerable to having someone walk in off the street while I was working by myself. Certain that I was safe, I opened my office door and dropped my bag next to my desk. My desk faced the window, and normally, I loved looking out at the garden outside. That day, however, I felt uneasy about having my back to my office door. Even though I’d made sure the building was secure, I didn’t want to make it easy for someone to sneak up on me. As a woman working in a large city, I’d learned it was better to be safe than sorry. As an extra safety measure, I shut and locked my office door, and then fired up my computer and got to work.

Without the kind of interruptions that can occur during a regular workday, I was making good progress on my project. The quiet made it easy to focus. Then, without warning, I had the odd feeling that I wasn’t alone. I turned my head to glance at my office door, and out of the corner of my eye, I saw someone standing there.

Startled, I sucked in my breath. How had someone gotten into my office? I was sure I’d locked the door. How long had they been standing there, silently watching me? I swiveled in my chair toward the figure, but whoever I’d seen had vanished. I studied my door. It was still closed. I opened it and scanned the hallway. There was no one there.

Later, I told a co-worker about my experience, and she relayed a story the janitor had shared with her. Once the janitor was working alone in our building, when he heard knocking coming from inside the supply closet. I’d met the man—he didn’t seem like the kind of person who would be easily startled. This time, however, he was shaken up by the noise because he knew he was the only person around. It was late at night, and all the outer doors to the building were locked. No one could have gotten in and slipped into the closet. Hesitant to open the door, the janitor called out. “Hello?” No one answered, but the knocking continued. Finally, more angry than scared, he said, “Well? Are you coming out or not?” The knocking stopped. The janitor opened the closet door to find it empty—no one inside playing a joke, and nothing that could have made the knocking noise. I don’t know if he ever heard the noise again or experienced anything else that was strange, but he kept working there. So did I.