The Thing in the Closet

My grandmother used to tell me stories about a ghost named Ella, who liked to fix things. Apparently the same spirit haunted my great-grandfather, following him from house to house. Can ghosts be inherited, passed along like a family heirloom? It’s a disconcerting thought. I don’t have an answer, but it’s always interesting to chat with my family and compare notes. We’ve had some strange experiences.

This week my aunt shared a story with me about something that happened to her when she was twelve or thirteen. She and her family lived out on a farm, and one night they were all sitting in the living room, watching TV. During a commercial break, she went to her room to get something. She planned a quick in and out trip since she knew just what she was after and where it was. She didn’t turn on her bedroom light (though she now says she always turns on the light, and I can’t say I blame her). She headed straight to her dresser, which was situated next to the closet. 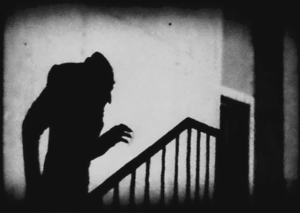 As she reached out her hand to retrieve the item she had come for, she felt pressure on her left shoulder. She froze, and then heard a hissing whisper. “Suuuusssaaannnn.” What is weird is my aunt is deaf in her left ear, and yet, she clearly heard the voice. She said she remembered fighting back panic, and then getting angry. She thought, “I will not show fear,” even though her insides had turned to Jello. She drew herself up as tall as she could, squared her shoulders, and forced herself to stand there. She grabbed the object she had come for and then calmly turned and went back out to the living room. Her family was still sitting there, watching TV, completely unaware of her encounter with the thing in her closet. My grandfather is known for playful attempts to surprise people, so my aunt asked him if he had tried to scare her. He insisted it wasn’t him, and my grandmother and my dad backed up his story.

Oddly enough, I had something similar happen to me at around that same age. Nothing touched me, but one night when I was in bed, I thought I heard my dad call my name. Something about the voice wasn’t right though—it sounded like my dad at first, but then I realized it sounded hollow, more like someone imitating my dad’s voice. I knew my dad was downstairs, talking to my mom, but the voice sounded like someone was right there in the room with me. I got a strange feeling that someone was hiding behind my closet door, which was propped open. That freaked me out, so I went downstairs to see if Dad had called me. He hadn’t.

The question remains: what called out to us? Could it have been the same entity, even though our encounters happened decades apart and in different places? I don’t know, but it is weird that we had similar experiences. This is why neither of us sleeps with the closet door open.

This entry was posted on September 12, 2015 by Melissa Eskue Ousley. It was filed under Ghost Story and was tagged with bogeyman, closet monster, ghost, myth.